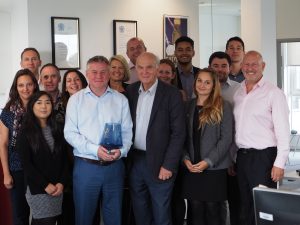 The Queen’s Awards for Enterprise were won by TrackBack for both International Trade and Innovation. The International Trade Award recognises TrackBack’s impressive rate of international growth, with export revenue quadrupling within 3-years. The Innovation Award recognises the unique product that TrackBack has created, which helps vehicle manufacturers in particular, track the follow-up of the leads they send to their dealers. As a result, customer experiences are improved and sales conversions significantly increased.

TrackBack has continued to grow since the Awards were announced in April. Hyundai Belgium and Ford Motor GB have subsequently both launched TrackBack to their dealer networks, and two further clients (Mazda and Volvo) are scheduled for launch in early 2018. Most other vehicle manufacturers already use TrackBack which was invented 10 years ago by the company’s founder and Chairman, Jerry Horwood, who also met Vince Cable on his visit today. 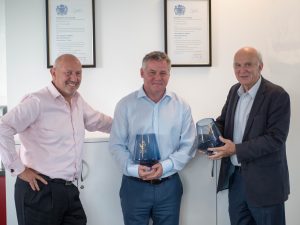 Sir Vince commented, “It is wonderful to visit a local Teddington company that is rightly winning Queen’s Awards for their innovation and international growth. Their performance within an extremely competitive industry is testament to the expertise and determination of a talented team.”

Gareth Thomas, TrackBack’s Managing Director, said, “It was a great honour to have Sir Vince Cable visit our office today. It was not only an opportunity to celebrate winning two Queen’s Awards, but also to discuss the business challenges we face going forwards in an uncertain environment.”